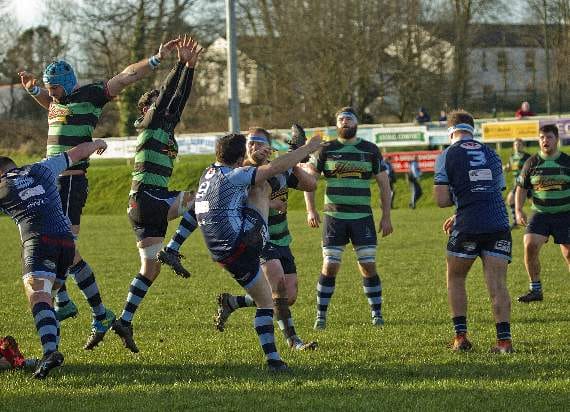 The Ystrad Rhondda scrum-half kicks at lineout, as Alex Jenkins and Richie Rees attempt to block it. Pic Elwyn Davies

Narberth 11 pts Ystrad Rhondda 23Ystrad Rhondda arrived to a sun-swept Lewis Lloyd ground, which ha`d recovered from a week of rain and an overnight frost.

The Otters had played and won the earlier away game 18-8.

The Rhondda club had been at the bottom of the league until they won their last three games, including a victory at the Gnoll the previous week against Neath and are now clear of the relegation zone.

Clearly rejuvenated, comparison of the team between the two games between the clubs indicated 10 changes to their squad for their visit to Narberth on Saturday.

For the Otters, Nick Gale with strained ligaments was unavailable, the second row of Jake Baker and Alex Jenkins returned, with Harry Phillips taking his place on the subs bench.

Ystrad Rhondda kicked off playing towards the clubhouse with the sun beginning to fall. In the first few minutes there was nothing to indicate that the Otters were in for a difficult afternoon.

They were awarded two penalties, but handling errors spoiled their attempts to move down field.

From a lineout, the valley side kicked to touch. Alex Jenkins took a clean catch, with the ball being passed on to Roy Osborne who as he drove forward was brought to ground.

He was penalised and Rhys Truelove, the opposition fly-half, placed the ball into the 22.

From their lineout, Ystrad Rhondda set up a rolling maul from which the ball entered touch.

They were awarded a penalty at the lineout and again Truelove kicked, this time to near the corner flag.

They took clean ball, set up another rolling maul and crossed the line for second row Liam Morris to score, Truelove converted, giving the visitors a seven-point lead after seven minutes.

The game restarted and it was very clear that the visitors were playing at a higher tempo than the Otters, who seemed unable to set up any meaningful attacks.

The Otters were penalised for a high tackle and, although some 45 metres from the posts, Rhys Truelove found the target to give the visitors a 10-point lead.

We then witnessed two consecutive lineouts where the Otters lost the ball on their throw.

Something clearly was amiss in an area of the game where they are normally guaranteed good ball.

Then, with Ystrad Rhondda attempting to outplay the Otters at the rucks, they were penalised. Ianto Griffiths stepped up and kicked three points for the Otters.

The game restarted and the Otters attempted to pick and drive their way down field.

Suddenly Lewis Gibby burst forward from the ruck, was brought down and was able to regain his feet to move forward a few times, before being penalised for not releasing the ball at the tackle.

The visitors kicked the Otters back to their 22 where they were were penalised in front of the posts for not releasing.

Again Rhys Truelove came forward and had no difficulty in adding a further three further points on 24 minutes.

From the restart, the Otters reached midfield and were awarded a penalty when Ystrad Rhondda talked back at the referee.

Again Ianto Griffiths was able to add three points, reducing the deficit to 13-6 after 28 minutes.

Narberth attempted to use their threequarters, but it seemed as though Ystrad Rhondda knew a long pass would occur and when they intercepted and kicked to the 22, the Otters were again penalised at the breakdown.

Not surprisingly, Rhys Truelove again stepped up and banged the kick between the sticks to restore his side’s 10-point advantage at 16-6.

For the remainder of the half, the Otters used a scramble defence and held back the visitors’ efforts, but again we saw the Otters lose further lineouts.

Throughout the first half they played with a greater intensity, not allowing the Otters to play their normal game and who in comparison looked sluggish.

Home supporters awaited the second half, expecting a response after the half-time discussion.

At the restart, Dafydd Pritchard gathered the ball from the kick-off and returned it with a kick to the visitors 10-metre area.

Immediately we saw a more energetic Otters response. Play moved back towards halfway where Ystrad Rhondda were penalised, but this time Ianto Griffiths was unable to add to his side’s total, as the ball fell under the crossbar.

Gathering the ball from the restart, the Otters attacked only for the final pass to end, in touch.

The referee then saw a demeanour on the ground and awarded a penalty, which Jonathan Rogers kicked into touch 10 metres from the line.

Yet again the lineout was lost, but this time because the throw was considered not straight.

Steffan Phillips then came off the bench, replacing Jake Baker. A minute later, Ystrad Rhondda prop Tom Foulkes was shown a yellow card and sent to the sin bin.

This time the Otters secured the lineout and set up a rolling maul to cross the line for hooker Rhodri Owens to score.

Ianto Griffiths’s conversion attempt veered to the far side of the posts, leaving the score at 16-11 on 53 minutes.

The game restarted, with the ball going into touch. The referee then had to sort out discipline when both sets of forwards had a set-to.

At the lineout, the Otters set up an attack, only for the move to break down.

The visitors made two replacements from the subs bench which was followed by an Ystrad Rhondda lineout which had Narberth supporters outraged for what they observed as the ball being thrown to their forwards.

The ball went out to the threes who made ground before fly-half Truelove broke through the defence to score and convert his try, taking the score to 23-11 on 68 minutes.

The Otters attempted to move forward and were able to put the opposition try line under pressure, but after several pick and drives, Ystrad managed to win a ruck and clear the danger.

The referee blew full-time shortly afterwards, with Ystrad Rhondda jubillant at their success.

In both halves, the visitors were the better team, maintaining their intensity of pressure throughout.

The Otters, with their lineouts failing throughout the game, were starved of possession.

It appeared as though the visitors were aware of the Otters game and pressurised them throughout.

Later Sean Gale commented that he was disappointed with the performance, a few tackles were missed and also some lineouts.

“The Championship is now a very competitive league, if you are not at the top of your game every week, there are 14 competitive teams,” he said. “They came down desperate for a win.

"Unfortunately, we failed to get a bonus point, which was a disappointment.

"There is a need to work on our game, be more clinical to win the game. We were not accurate enough in the things we need to do.

“So it was very disappointing, but we will bounce back.

"We have a month off now and we will all be training hard to put it straight.”