The story behind airman’s medal 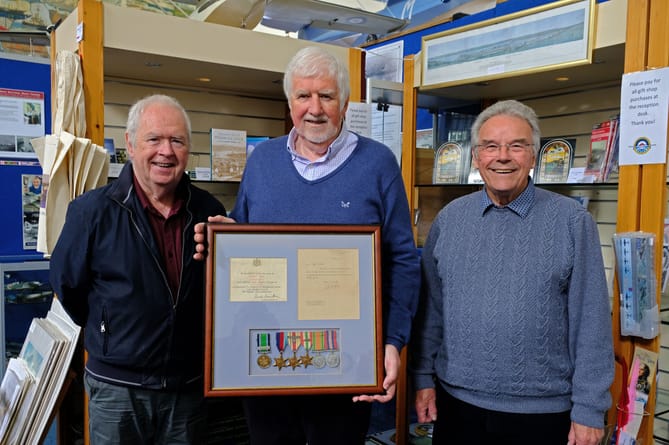 A remarkable survival story from World War II has been recalled with the donation of an RAF airman’s campaign medals to Pembroke Dock Heritage Centre.

They belonged to a well remembered local man, George Tasker, and were donated by his nephews, David and Chris Griffiths.

Links with the family were made by Centre Volunteer Ken Edwards who is digitalising many photographs in the Centre’s archive. Ken noted photographs of George Tasker and passed them to the family who generously decided to donate the medals and memorabilia for the archive.

George Tasker was serving in France when the German invasion began in May 1940. In the chaos that followed it was ‘every man for himself’, as George recalled in later years. He made his way south reaching the French port of St Nazaire where the troopship ‘Lancastria’ was offshore. George joined thousands of service personnel aboard but soon after the German air force bombed the liner, which sank rapidly.

Thousands died in one of the war’s worst maritime disasters but George survived. He thanked his lucky stars that he had learned to swim at Cresswell Quay, near his Cresselly home.

Within a year of returning to the UK George was on a troopship heading for North Africa and served in the Desert and Italian Campaigns, being Mentioned in Despatches in 1945.

After the war George and his wife Sybil lived in Pembroke Dock and George worked for well over 40 years for the well known business of T. L. Bowling and Sons. He was also a stalwart worker for the town’s RAFA branch.

George died in 1998, aged 79, and his medals and his story will go on display at the Heritage Centre.