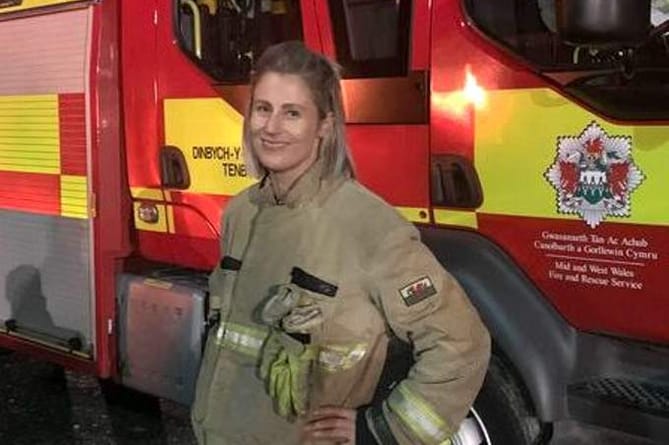 Tenby Fire Station has welcomed its first female firefighter into the fold.

Cindy Richards who has joined Tenby’s voluntary fire crew, the service has announced, said that she first thought about joining the fire service a few years ago, after a close friend who had been a firefighter for 20 years suggested it.

“I’d been interested in the Ambulance service but after a bit of research it would mean leaving my job and going back to college, and as I’m a single mum, this wasn’t an option financially,” she explained.

“I work in The Glen pharmacy as a dispenser, and I love the part of my job which helps people every day, but I needed something more to do, so helping the local community by joining the fire service seemed like something I’d enjoy!

“About 12 months ago I decided now was the time to apply for the fire service and take on the challenge! I only work part-time and my daughter was 16 so I had time to put my whole attention towards it.

“I started the application process in January and started the training the beginning of February. I can honestly say it’s the hardest thing I’ve done physically and I’ve done Ironman Wales!

“There was times when I didn’t think I was strong enough, but the instructors were amazing with me! They encouraged me to keep going, not that I was going to give up!

“Also the guys that were on my training course were amazing, we helped each other through it,” she continued.

Cindy whose dad and his brothers were members of the Tenby RNLI lifeboat crew many years ago, whilst her cousin Rob is also currently a crew member, as well as being a policeman, said that she could definitely recommend to any female who is thinking of joining the fire service, or indeed any of the emergency services, to go for it.

“There definitely isn’t enough females in the fire service but I feel that this is definitely changing,” she remarked.

“Everyone I’ve met through training or on shouts have been so nice and encouraging. The training is tough but it’s worth it! It’s like having a brand new family!

“Tenby fire station is a massive part of the local community, and as a child growing up in Tenby the Firefighter’s Carnival was the highlight of the summer.

“The firefighters in Tenby are a renowned part the community and are seen to be friendly and very approachable, so I’m super honoured to be a part of their team!”

Also climbing on board with the Tenby fire crew recently is local Carpenter Luke Hartland.

“It was great to go through training with Luke knowing that we’d both be the new guys at Tenby, he gave me encouragement and told me stop moaning! Since joining I’ve realised more and more that in the fire service it’s all about team work, no one is ever on their own,” added Cindy.

A spokesperson for Tenby Fire Station said: “Both new additions have settled in very well and are progressing well with their development.”

To find out more about the role of an On-Call Firefighter, visit Mid and West Wales Fire and Rescue Service’s website https://www.mawwfire.gov.uk/eng/join-us/on-call-recruitment/