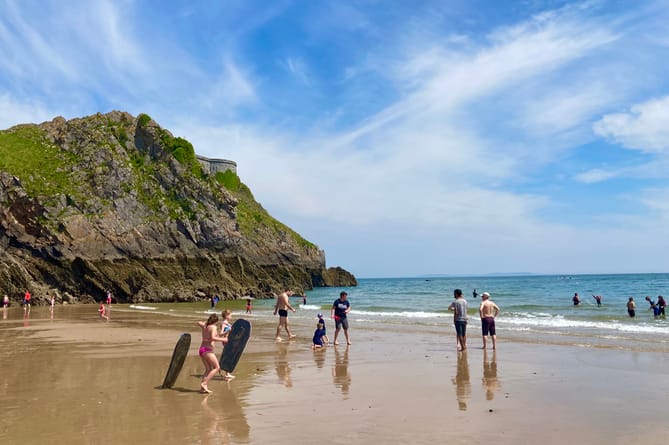 Seventeen Pembrokeshire beaches have been named among the best in Wales.

And 10 County beaches picked up the coveted Blue Flag for 2022.

The Blue Flag Award is recognised around the world as a symbol of quality.

Applications invited for the Pride in Pembrokeshire award

The Green Coast Awards recognise the ‘hidden gems’ of the coastline which also have excellent quality of water but not the same level of infrastructure as traditional seaside resorts.

The Coast Awards play a vital role in protecting our precious marine environment.

Keep Wales Tidy’s Chief Executive Lesley Jones said: “We are lucky to have some of the world’s best beaches and marinas on our doorstep. The success is a testament to everyone who has worked so hard to protect and improve our beaches and keep our coast clean and safe.”

“We hope that everyone visiting our stunning coastline will enjoy and cherish our beaches responsibly. Please make sure you make memories, not mess and take your litter home with you.”

“The Awards underline that Pembrokeshire has outstanding beaches and amenities with some of the best water quality throughout the United Kingdom.

“Pembrokeshire is rightly proud of its beaches and a lot of work goes in to keeping them clean, safe and welcoming all year round for local people and visitors alike.

“Please help us to keep our coastline clean by using the bins provided or taking your litter home with you.”

One popular beach, not included on the list is Tenby’s North Beach, which has lost its Blue Flag status after the standard of the bathing water dropped down from being rated as ‘Excellent’ to ‘Good’ after an assessment for 2021 by Natural Resources Wales showed that visible pollution was found in the sea from sewage.

A classification of ‘excellent’ water quality is one of the main requirements for applying for a Blue Flag award.

In the published report by NRW last year, the organisation stated: “Natural Resources Wales continues to work with Pembrokeshire County Council to identify any sources of pollution.

“NRW samplers make visual observations of the beach at every visit. This includes assessments of sewage debris, animal faeces, litter and oil or tar.

“At Tenby North, data are available for the four year assessment period from 2017-2020. Sewage debris was observed in trace amounts on less than ten per cent of occasions. Animal faeces was not noted at this site.

“Trace amounts of litter were observed at the bathing water between twenty and thirty percent of occasions. Oil and tarry residues were not noted at this site.

“Heavy rain falling on pavements and roads often flows into surface water drains or highway drains, ending up in local rivers and, ultimately, the sea. The quality of bathing water may be adversely affected as a result of such events.

“Tenby’s sewage effluent is pumped to the relatively new Tenby Wastewater Treatment Works at Gumfreston, where it is biologically treated and disinfected with ultra-violet light, to protect the bathing water quality at Tenby beaches. This tertiary treated sewage is then discharged via, a long sea outfall.

“Within the Tenby catchment there are a number of storm, emergency and surface water outfalls, that discharge around the town. These protect domestic properties in Tenby from being flooded by sewage during periods of heavy rainfall.

“The main pumping stations are in Tenby Harbour and at the Salterns. The Harbour Pumping Station has recently been upgraded to improve performance. A project known as Event Duration Monitoring (EDM) is underway to install telemetry on Combined Sewer Overflows (CSOs) within 2km of a bathing water by 2020 so that Dŵr Cymru Welsh Water (DCWW) know when the CSOs are operating and can work to reduce spills. One CSO near Tenby North is included in the project.”

Wales has more Blue Flag beaches per mile than anywhere else in the UK.