Congratulations to Dave and Janice Jones on their Diamond Anniversary! 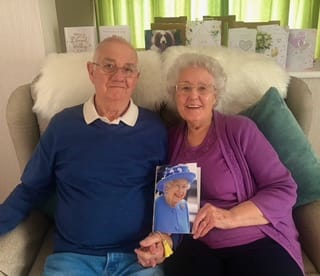 Pictured celebrating their Diamond Wedding Anniversary today (Thursday) are David and Janice Jones, who were married at Sardis Chapel on May 26, 1962.

They were just teenagers when David, son of William and Flossie Jones, of the Glebe, Tenby, met Janice, daughter of John and Doris Scourfield, of Valley Road, Saundersfoot. 14-year-old Jan was still at school, while David, aged 18, was working at Lloyd and Matthews Ironmongers in Tenby.

After being called up, David spent three years in the RAF, then went on to work in the building trade. Jan’s work took her to various Tenby shops, including the Co-op, Boots the Chemist, and WHSmith.

Dave and Janice are blessed with two sons and daughters-in-law: Kev and Angie; Andrew and Carol. Both couples gave them two granddaughters each: Kirsty and Sara; Laura and Holly. Seven great grandchildren complete the four generation family.

What is the secret of a successful 60-year marriage? Jan says it’s “give and take”. Congratulations to Mr. and Mrs. Jones and best wishes for their future together.