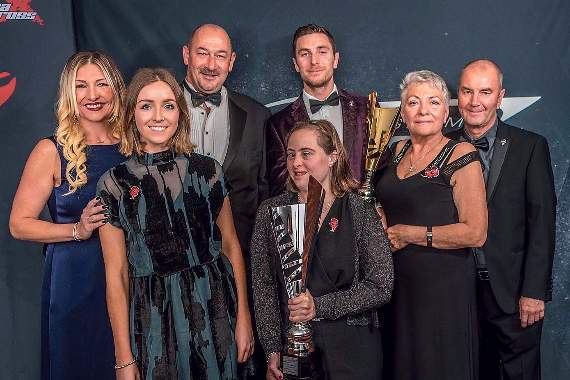 Daisy and Sam are seen celebrating with family Jan, Chris and Lucy Coleman, along with Libby Roberts (Sam’s partner) and trainer Neil Holmes.

Saundersfoot’s Coleman Racing family were out in force last weekend for the P1 Annual Awards Ceremony which took place on Saturday at the fantastic Wotton House in Surrey.

Although racing brother and sister Sam and Daisy, and their family, have had many causes for celebration this season, the evening was a great finish to their phenomenal debut season, not to mention an excuse to swap their race suits for frocks and black ties!

Family, friends and sponsors were able to be a part of the occasion and, although sadly their mentor, former P1 champion John Wilson, was unable to attend due to a previous engagement, Daisy and Sam dedicated their victory to John in recognition of his huge contribution to the team’s success.

Amongst the winners, a special mention and congratulations goes to E.Marine racing on their award for Rookie of the Year.

Welcome the Queen’s Baton Relay in Pembrokeshire on July 1

P1 also announced an exciting venture; with the continued growth and success of Powerboat P1, the series will be racing in Mumbai, India, early next year.

Sam and Daisy were formerly invited to race at the epic event when receiving their award from Chief Operating Officer, Robert Wicks. Details of this are to be announced shortly.