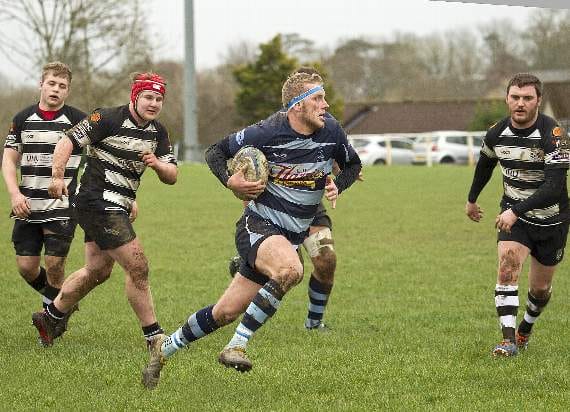 Last Saturday the visitors to the Lewis Lloyd ground were Cross Keys a Club with a well known and respected history.

Unfortunately they suffered enforced relegation from the Premiership at the end of last season and have now suffered significant damage to their ground from the recent floods that hit the South Wales Valleys.

This game was a rearranged fixture because the Otters Ground was waterlogged back in November. Before the game, match announcer Freeman Brawn, informed supporters of the deaths of Ralph Jones, Glyn Williams of Folly Farm a valued Club sponsor.

Also Bill Phillips who made such an impact back in the late 50s and early 60s as a terrier of a scrum half and captain of the Club in both decades and also served on the committee.

In recognition and respect of their service to the Club, a minute’s silence was observed before kick off.

The storms had continued during the week and overnight and fortunately the icy gale had dried the ground surface.

The game started with the Otters facing the icy wind. Starting for the Otters at full back was 18 year old Llew Jones enabling Ianto Griffiths to start at fly half, Josh Davies at centre is 19 along with substitute prop Adam Thomas.

Ashley Sutton playing on the wing was making his debut for the Club.

The Otters kicked off into the gale which assisted the ball sailing straight over the touchline.

The packs scrummaged back on the centre line with Cross Keys heeling their put in.

They attempted to move upfield but were limited to two phases before kicking to the far touchline.

Regaining the ball from the lineout Cross Keys advanced down field with several phases and despite a strong Otters defence forced their way over the line with centre Corey Nicholls adjudged to have touched down.

Fly half Loui O Brien converted, This stung the Otters into a determined response and gained two penalties for Cross Keys infringements.

With the latter penalty Rhys Lane took it quickly with Jake Baker on hand he drove through, a couple of rucks saw the Otters advance gaining another penalty which they kicked to the far corner.

Retaining possession Rhys Lane quickly spread the ball out to his threes for Jake Jenkins to score under the posts giving Ianto Griffiths an easy conversion.

Two minutes later on 13 minutes Cross Keys scored their second try through wing Dan Hitchings which was not converted.

Both teams were tackling aggressively before Cross Keys were warned for a dangerous tackle.

On 22 minutes they went further ahead which again came from phased rugby, advancing downfield before fly half Loui O Brien seeing a gap sprinted through to touch down under the posts enabling him to gain an easy conversion.

This brought the score to 7 – 19. After this the Otters made progress with a Ianto Griffiths penalty kick onto the Cross Keys 22.

Unfortunately their lineout was messy but they managed to retain possession but the promising movement broke down with a poor pass followed by yet another move breaking down.

Supporters in the stand were now feeling the effects of the icy wind and the Otter threes may have also suffered the same effects.

Cross Keys had made good use of the wind and played with confidence having won their recent games including against second placed Bedwas.

During half time the Narberth Club Officials made a collection for the Cross Keys Redevelopment Fund recognising the damage caused to their ground and Club house.

Cross Keys restarted the game for the second half and whilst getting to the ball as it was gathered just inside the half way line, they were penalised at the ruck for holding on.

Ianto Griffiths with the gusting wind at his back chose to go for the points.

The distance was 49 metres, local supporters thought it was a bit ambitious, but Ianto’s judgement proved sound as the ball sailed through the posts bringing the score to 10 – 19.

From the restart Cross Keys made progress upfield using the rolling maul until disrupted, then releasing and passing to the left wing who looked as though he was going to score, but Alex Jenkins took him into touch with a try saving defence just outside the try line.

From the lineout the Otters were able to feed Rhys Lane who put in a clearing kick to the Otters 22.

At 46 minutes Roy Osbourne was brought into the second row replacing the hard working Jake Baker.

The game moved on with both defences strong before wing Dafydd Pritchard made a determined run down the far touchline before being tackled.

On 52 minutes Llew Jones was withdrawn and replaced from the subs bench by Jonathan Rogers.

This resulted in a change of strategy with Ianto Griffiths moving to full back and Jonathan Rogers replacing him at fly half.

The Otters attempted to take advantage and set up a series of attacks, but were stopped by a dogged Cross Keys defence. On 64 minutes Lewys Gibby replaced Rhys Lane at scrum half.

Cross Keys instead of using phases attempted to move upfield with a maul, often a feature of Gwent rugby, but the Otters pack forced them into touch on the half way line.

The lineout ended in a scrum, but the Otters advance was spoilt by a knock on.

Having failed with the rolling maul, Cross keys returned to using phases but after the ninth ruck a knock on occurred.

They were awarded a penalty and rather than attempt to go for 3 points they chose to kick to touch.

At the lineout they set up a rolling maul, but the Otters managed to stop them and regain the ball.

The Otters then set up a series of breaks down the far side of the ground with wing Dafydd Pritchard running determinedly was able to cross the line to score.

Lanto Griffiths safely converted bringing the score to 17 – 19 on 77 minutes.

The restart was again gathered by Cross Keys but the threequarters mis- fielded.

At the scrum the Otters pack were able push Cross Keys back and the ball was released but Cross Keys won the breakdown.

However, feeling the pressure the game was held up by a Cross Keys injury.

The ball was kicked into touch but they again offended at the breakdown and this time the referee awarded the Otters a penalty on 80 minutes, on the 22 and to the right of the posts.

Gale stepped up, took his time to consider and focus on the challenge of the strong wind.

He moved forward and kicked, from the stand viewing point the ball appeared to be sailing to the left of the posts when suddenly the strong wind took control and the ball went clearly through the middle of the post to the sheer delight of supporters.

Cross Keys restarted and the Otters gathered and kicked it off the field for the referee to blow full time.

Griffiths judgement and nerve won the Otters the game at 20-19.

The win puts the Otters in sixth position which is where the coaches aim to finish the season, later Director of Rugby Sean Gale commented that the result was pleasing.

Already this season we have beaten two Clubs previously in the Premiership, this was a difficult game.

We had a young players in the team playing today, young Llew Jones is only 18, Adam Thomas the under 20’s prop is only 19 as is centre Josh Davies along with Jake Jenkins.

We are attempting to develop Pembrokeshire players, Ashley Sutton made a reasonable start.

The lads held Cross Keys to a scoreless second half and their superior fitness played a part.

Cross Keys had several very experienced players who have spent many years in the Premiership.

They also brought on some older very experienced players as replacements.

For us, Griffiths made some good kicks and at the end held his nerve to win the game.

The pack played well, Alex Jenkins had a great game and for me was Man of the Match.

We have plenty of aspects to work on but a feature was our fitness which saw us take the winning points and gave valuable experience to our young players.