Otters create history as they beat Neath in festive thriller 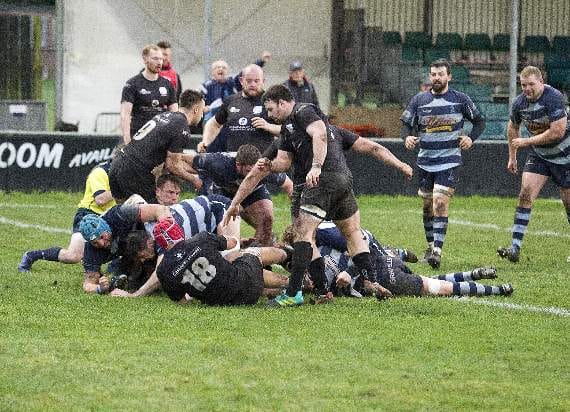 It’s the winning try, the scorer on the ground being flanker Tom Powell. Pic. Elwyn Davies

Following on from the very successful Boxing Day charity game organised by Bill Ridge and the committee at Narberth, quite a large number of supporters accompanied the Otters to the Gnoll at Neath on Saturday.

Neath are just one place above Narberth in the Championship League and regular followers wondered whether the Otters could at last achieve a win at this famous ground.

There is a longstanding friendship between the two clubs, with the late Brian Williams a legend at both clubs.

Neath were relegated from the Premiership at the end of last season facing a financial crisis. It seems that a new sponsor was found and debts cleared with recognition of a need to rebuild the club within the Championship League.

Otter supporters were given a friendly welcome on arrival.

The All Blacks had won their last five games and were looking to make the game a sixth win.

Before the kick-off there was a minute’s silence in respect and memory of several former Neath players.

The Otters kicked off playing towards the town centre and immediately forced Neath onto the defensive.

Josh Davies made a determined break going through a number of players before kicking ahead.

The ball ended in touch, with the Otters gaining possession and settng up a maul, followed by the referee awarding a penalty in front of the posts, which Nick Gale converted to give a three-point lead.

Six minutes later, they were awarded another penalty, from which Nick Gale was unable to increase the lead.

Up to this point, the Otters were playing with confidence. Neath responded and set up a series of phases before fly-half Callam Hall was slipped the ball and, with a jink, was through a gap in the Otters defence, enabling him to race over for a try on the left side of the posts, but failed to convert.

The All Blacks were quickly back on the attack, with their left wing and centre interchanging.

The Otters’ defence held firm and contained the Neath efforts, but on 22 minutes, after a series of pick and strong drives using the force of their front row forwards, prop Liam Tobias scored and this time Callum Hall converted giving Neath a 12-3 lead.

At this point, Iestyn Morgan replaced Luke Griffiths in the Neath threes.

The Otters responded positively and a promising attack faltered when the final pass went astray.

Then on 26 minutes Rhys Lane scored an excellent try.

The Otters heeled from the scrum, Ianto Griffiths set up an attack, with the Otters interchanging, before Rhys Lane dummied and jinked to break clear of the defence to score, which Nick Gale converted.

Neath restarted the game and quickly followed up and after a few drives the Otters were penalised for a definite high tackle.

To the Otters and supporters relief, the referee just issued a warning and from the penalty, Callum Hall added three more points to the Neath score to make it 15-10.

Three minutes later, on 35 minutes, the Otters were awarded a penalty, which Ianto Griffiths kicked to the corner touchline.

From the lineout, Alex Jenkins set up a rolling maul, which the Neath forwards collapsed. There seemed a moment of hesitation, but the referee awarded a penalty try which enabled the Otters to take the lead at 17-15.

Then on 40 minutes, the referee sent flanker Tomi Antozzi to the sin bin with a yellow card, with the Otters holding a small lead at halftime.

Neath restarted the second half, with Ianto Griffiths gathering and placing a strong high kick back to the home 22, where they misfielded, resulting in a scrum.

The Otters set their scrum first with a low position, whereas Neath, as in the first half, using a physically large front row, took time to get down to the set position.

The Otters heeled, Rhys Lane quickly distributed the ball, with Ianto Griffiths placing a subtle punt which outside centre Josh Davies chased, gathered and raced to within a few metres of the line before being pulled to ground.

With a successful ruck, however, Neath were able to clear the Otters threat.

There followed several phases of play which proved the Otters defence to be sound. Play kept breaking down because of a series of penalties which the Otters used to advance and, with Alex Jenkins now supreme in the lineout, they set up a series of rolling mauls, before the referee awarded a scrum.

But because of problems in the front rows, it was set several times before being heeled and the subsequent move broke down, with the final pass being mishandled.

At the scrum, Bradley Davies was replaced by Dan Jacobs.

Neath managed to move into the Otters 22 when David Griggs broke clear to put Neath in the lead, with Callum Hall converting to make the score 22-17 at 60 minutes.

The Otters then made more changes, replacing half-backs Rhys Lane and Ianto Griffiths with Lewys Gibby and Jonathan Rogers.

Neath collected the restart kick and placed the ball into the Otters 22 with Jonathan Rogers returning it with interest into the Neath 22.

At the next interchange, Neath were penalised, with the Otters kicking to the corner. From the lineout, Alex Jenkins set a rolling maul which saw them cross the line, with flanker Tom Powell touching down.

The scores were now level, but Nick Gale, faced with a difficult kick, produced an excellent conversion to give the Otters a 24-22 lead.

Neath attempted to regain the initiative, but the Otters’ defence was now too strong and, in attempting to gain ground, a kick into the Otters half spun into touch.

Alex Jenkins made sure of his catch, passed back to Lewys Gibby, who kicked into touch, with the referee blowing full-time.

The squad enjoyed that final moment in what had been a tough encounter. It sets them up for their next game at home to Tata Steel tomorrow (Saturday), kick-off 2.30 pm.

Afterwards in the clubhouse, director of rugby Sean Gale commented: “It was an absolutely fantastic win, the boys fought really hard.

Our kicking game was good, we missed a lot of chances, Josh Davies had a chance to score under the posts. We put a lot of pressure on them from the driving lineouts and scrum from which we could have scored more.

Overall it was excellent. Big plusses for me, we had a good kicking game and the driving lineout and the lineout in its entirety because I think that Neath lost nine or 10 lineouts attempting to get the game going and when they did our defence was outstanding.

They were superb, there were not many missed tackles out there.

In attack we looked sharp. It was a fantastic win that the boys should saviour that a small club can come to the Gnoll and beat Neath.

It was one of the top games I have been to in all honesty.

It’s a huge achievement by these ambitious players. A lot of praise must go to the players for winning at the Gnoll.”

Finally, this result has created a bit of Pembrokeshire history as Narberth RFC are the first Pembrokeshire club to beat Neath on the famous Gnoll ground.