Ground and weather proved a leveller in Championship League game 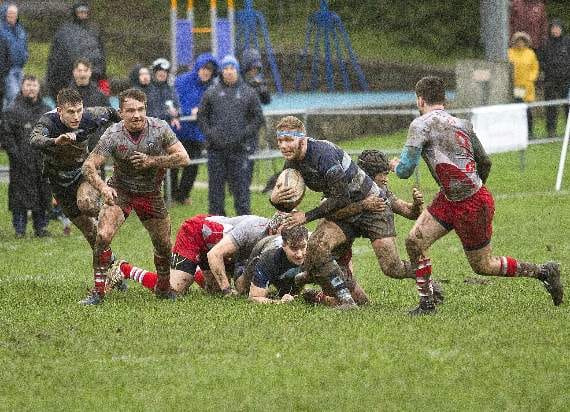 Jake Jenkins attempting to break through opposition having received ball from Josh Davies (on ground) with Llew Jones on the outside. Pic Elwyn Davies

The Otters travelled to Trebanos with a rearranged pack and both regular second row forwards unavailable.

In their place they fielded two back row forwards, Steffan Phillips and Dewi Williams.

In the threequarters, Nick Gale was still injured from the previous week, with the remainder of the threes being rotated within the squad.

Jonathan Rogers started at fly-half, Lewys Gibby at scrum-half and Ianto Griffiths at fullback. The centres were Jake Jenkins and Josh Davies, with Dafydd Pritchard and Elliot Dawe on the wings.

Before the game, the Otters lay in sixth position in the league and Trebanos in 12th.

Otter supporters had great hopes of a further win, having won the game at Narberth 34 -12 earlier in the season.

However, Trebanos, desperate to move away from the lower part of the table, fielded several Llanelli players in their pack.

The ground lies on the floor of the Swansea Valley.

A strong wind blew from the south, with driving rain throughout the match.

The general murky conditions meant that the floodlights were necessary throughout the game.

The Otters lost the toss, with Trebanos choosing to play with the driving wind and rain on their backs.

Narberth kicked off, with Trebanos returning the ball into their half.

The Otters set up a series of pick and drives to move up to halfway.

At the scrum, the Otters held their own, quickly heeled and with some quick handling by the threes, the ball reached Josh Davies, who broke strongly, slicing through the Trebanos throng of players before being brought down. Play had advanced to the Trebanos 22.

Already the conditions were affecting both teams, with the ball now greasy and slippery underfoot and it was beginning to get difficult to identify the players with their jerseys covered in black mud.

After 10 minutes, with play well into the Trebanos half, at a lineout, Steffan Phillips won a good clean ball, enabling the Otters to force Trebanos backwards, with play switching across field and following a further lineout, captain Richie Rees made ground in a forward drive before the ball was released, with the Otters inter-passing and making more good ground, only for the ball to end up in touch.

At the lineout, Trebanos knocked-on, from the scrum, the Otters heeled, Lewys Gibby passed out for centre Jake Jenkins, who made a diagonal break before being brought to ground, where the referee awarded Trebanos a penalty.

With the wind behind them, they were able to kick long into touch.

Their fly-half, receiving the ball from the lineout, switched play to the opposite side with his diagonal kick, the ball landing inside the Otters half.

At the lineout, the Otters collected and drove forward, only for them to be forced into touch.

There was then a period of intense Trebanos pressure.

Handling was becoming a bit of a lottery and knock-ons were frequent.

The referee awarded Trebanos a scrum near the Otters 22, then penalised the Otters for turning the scrum. The penalty kick hit the post, but bounced back into play and was fielded by Trebanos who again attacked.

The referee awarded a further penalty for a high tackle and this time wing Richard Brinton’s kick was accurate to give them a lead of 3-0.

The Otters restarted, only for the ball to be returned and gathered by wing Dafydd Pritchard, who made 40 metres down the touchline before being tackled.

Play moved back and fore, with some strong defending by both sides.

An indication of the strength of the wind came when Jonathan Rogers, who has a strong kick, kicked for the corner only to see the ball stop in flight and veer to the east side, gaining only 10 metres in distance.

The first half ended in midfield, with Trebanos still holding their small 3-0 lead.

Ground conditions were worsening as Trebanos started the second half.

The Otters’ tactic was clearly to use the wind and they were quickly within 20 metres of the line, but with the Trebanos fullback scrabbling to field the ball, the referee penalised an Otters player who was adjudged to have pushed him, enabling them to relieve the pressure.

The Otters regained possession and Richie Rees made a telling drive towards the line, being pulled down just metres short, but again Trebanos were awarded a penalty for a ground infringement and were able to clear the danger, finding touch just beyond the 22.

The fresh legs saw Rhys Lane with his searing breaks around the scrum and rucks advancing to the Trebanos five-metre mark.

Another break by Rhys Lane was penalised for crossing.

Players were now difficult to identify in the trying conditions as both sides defended strongly in the forward battle.

On 63 minutes, Trebanos were penalised near their 22 for tackling a player without the ball. Jonathan Rogers stepped up and kicked to bring the scores even at 3-3.

The Otters then replaced Ianto Griffiths with young Llew Jones.

From the restart, the Otters regained the ball and moved forward with the pick and drive technique and then Jonathan Rogers kicked to the 22 touchline.

From this position, Trebanos recovered and moved strongly forward, only to knock-on. Trebanos regained possession in the exchanges and managed to reach the Otters five-metre line. The Otters recovered and relieved the pressure, kicking to the 22.

This was then returned, with both defences resorting to a kicking duel.

It was noticeable that the wind had slackened, with Trebanos able to place the ball behind the Otters’ defence, but to no avail, with both Llew Jones and Jonathan Rogers able to clear the problem.

Time ran out, with the play in midfield and the game drawn at 3-3.

Visiting supporters were a little disappointed, but recognised that the trying conditions was a leveller and had to recognise it meant was just two league points.

The conditions put much demand on all players, with the Otters’ makeshift second row pairing doing well despite having to pack down against a much heavier pack who were well suited to the conditions.

Later Sean Gale, director of rugby, commented: “It was a little disappointing after a tremendous first half performance in keeping the score down to three-nil going down the field.

"So we put ourselves in a good position at half-time to win the game.

"Unfortunately, second half we did not get our game together, the wind picked up we could not get our length of pass.

"You have to give Trebanos their due, the way they defended and the way they got over the ball was very effective and stopped us playing our game.

"We gave away some cheap penalties and with the weather we were just not good enough to get any more points on the board.

“In fairness, it is not all lost at the end of the day because we took two points out of the game played in horrendous conditions.

"We have scored 60 points in the last four games and more importantly conceded only three tries.

"That is a huge positive, three games without conceding a try.

"That’s all positive and we look forward to playing Ystrad Rhondda on Saturday (kick off 2.30 pm), which will be difficult, but we have got to be confident playing at home.

"After that we have a bit of a break so that will be good for us and we look forward to the break.”