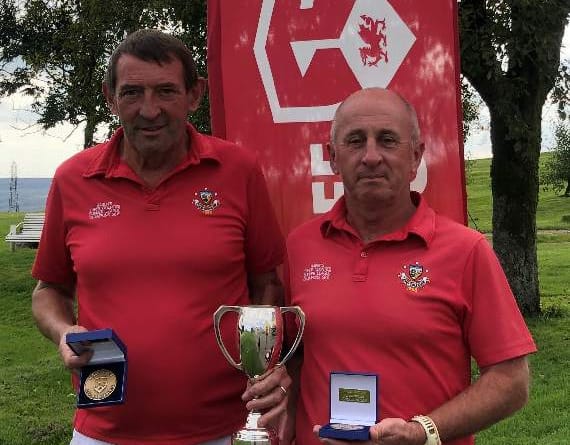 Three years ago Wales Golf started a Welsh Seniors National Greensomes stableford competition which was held at Creigiau and won by Austin Davies and Jerry Whitehouse from Tenby.

The following year it was held at Denbigh and won by Tenby’s Ross James and Loz Phillips.

This year it was held at Morlais Castle and the two players successful in the Tenby qualifying competition were Steve Watkins and Mark Edwards. Could they make it three in a row? Would they be asked to prove they were 55 or over (the answer was no)? Our links reporter, Warren Hacker, found out what happened.

The Tenbyites travelled east for the practice round on Wednesday, then spent the rest of the evening analysing the course planner, chipping into the waste bin in their hotel room and had an early night in preparation for the contest ahead.

They were in the second group away the next morning and got a double bogey on the 1st for a point and then scored steadily with a couple of pars on the 4th and 7th, managed to ‘mess up’ (their quote has been cleaned up for the paper) the easyish 8th before two points on the 9th gave them 17 after the ‘up-and-down’ front nine.

They managed to keep the scoreboard ticking over on the back nine with a mix of pars, bogeys and double bogeys and signed for 18 points in the second half to finish on 35 points. They sat and waited for the others to finish their rounds. Then the results were announced.

Ten other pairs achieved 31 points or more, with two managing 31, five getting 32 and one 33. In third place was a team with 34. In second.... on countback was another pair on 34. So Steve and Mark were first.

They were presented with the cup. They are national champions. They have kept up the ‘Greensomes Tradition’’ They have made it ‘Three In A Row’ for the Tenby club. No other club has won the comp (yet).

That places a lot of pressure on the next Seniors pair to represent Tenby in the competition at the Rolls of Monmouth in 2020!

Congratulations gentlemen. Well played. The Seniors are proud of you. The Rabbits are also proud of you. We all are. Welsh Seniors National Greensomes Champions. Sounds good, doesn’t it?