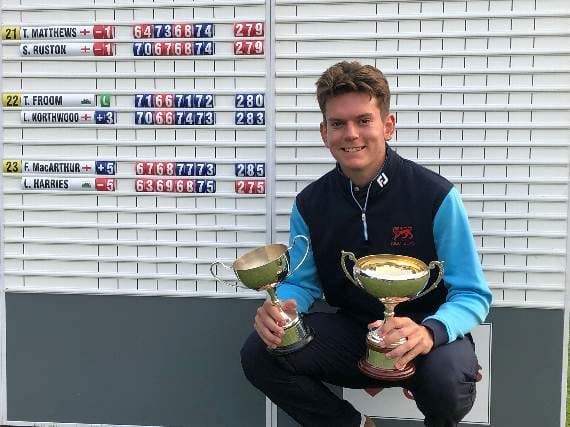 Tenby’s Luke Harries bounced back from the disappointment of losing a national final in the United States to storm to victory in the Welsh Open Youths at Glamorganshire Golf Club.

It caps a remarkable couple of weeks for the West Wales club after an all-Tenby final of the Welsh Ladies Championship with Becky Harries beating Bethan Morris.

Luke Harries beat off challengers from around the UK, Ireland and mainland Europe, with England’s Ben Quinney second. Oswestry’s Thomas Matthews was in a tie for third with England’s Archie Smith and Sam Ruston.

Harries opened with a 63 to take an early lead, rounds of 69 and 68 keeping him comfortably ahead, so a final round 75 still saw him win by three shots.

The previous weekend he was part of the team at Lincoln Memorial University in Tennessee which lost in the Division Two national finals.

“I had just got back from the US where I had played a lot of golf since January. We had just lost the national finals last week so it has been a rollercoaster of emotions,” explained 19-year-old Harries, a second year exercise science student.

“Reaching a national final was a really big thing for us, it was in Division Two because of the size of the university, so I felt I had to bounce back this week.

“Glamorganshire was similar to some of the courses I have been playing in the US, then when the wind got up in the final round I had to bring back my inner-links experience from playing at Tenby.

“It has been a good time for the club with Bethan and Becky last week, both getting to the final. There are a few strong players coming through the club.

“We all started with the pro Rhys Harry from a young age and he has developed us into solid players, so he has certainly had a big influence on us.”

Harries got off to a god start with that 63 in perfect conditions, but the course got tougher as the event went on.

“My iron play was dialled in for the first three rounds, I hit a lot of greens and gave myself chances, while the putter was hot in the first round,” said Harries.

“Then I tried to limit the mistakes, it was amazing how much the course changed in a short time when the wind got up and by the end I was grinding it out.

“I really liked the course. It is shorter than some of the places I am used to playing, but you need to be very accurate off the tee and any poor iron shots can get you in trouble.

“This win certainly boosts my confidence going into the rest of the season, starting with the St Andrew’s Links Trophy coming up this week.”

Wales Golf championships manager David Wilson added: “Congratulations to Luke, it is always good to have a Welsh winner of one of our major open championships.

“That first round set him up, but he played really good golf throughout. It was also so nice to see so many Welsh players riding high on the leaderboard.

“The Glamorganshire course was a tremendous venue, a challenging course in excellent condition, while the help of the club staff and volunteers was invaluable as always.”