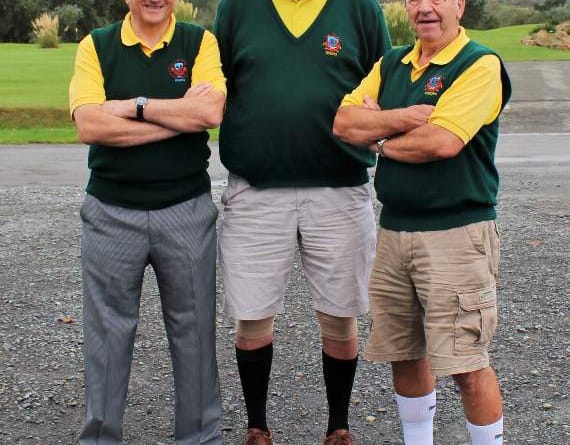 Tenby Seniors’ final match of the season was called off last Tuesday, due to the heavy rain forecast. The fear was that the Past Captains’ on the following day would suffer the same fate.

Fortunately, the tee times fell in between two weather fronts and it stayed dry, though breezy, throughout the afternoon. Wet weather gear was not required and the temperature stayed comfortable to enable the nineteen seniors taking part to enjoy a good afternoon’s golf.

Everything was green and well prepared for this annual event. The greens had recently been tined and seeded so, with the grass developing, they were not as slick as usual.

This made for some frustrating putts but did not prevent the enjoyment of a good afternoon’s golf. Friends greeted each other as the five clubs represented gathered in the clubhouse to hand their entry fee to Owain Picton.

Tenby was represented by three members this year, Stan Hudson, Allen Watts and Des Stone. The other clubs down to play were Haverfordwest (5), Newport (3), Trefloyne (4) and the host club, Milford Haven (4).

The preparation by Owain Picton was excellent with the format and prizes all laid out and ready to be presented. The general scoring was competitive and high as they all set about the challenge of beating the course. The lowest on the day was seventeen while most were in the thirties and twenties.

The winners were in the forties demonstrating the excellence of the golf on the day.

Before presenting the prizes Owain enlightened those playing with an explanation of the history of the trophy. The cup was commissioned in 1993 and the names of the benefactors are all inscribed on the inside of the cup itself. In that first year it was won by John Nahoe, of Haverfordwest.

Over the years it has been contested John Hancock, of Tenby, has his name inscribed on it a record five times.

Prize-winners on the day were as follows: