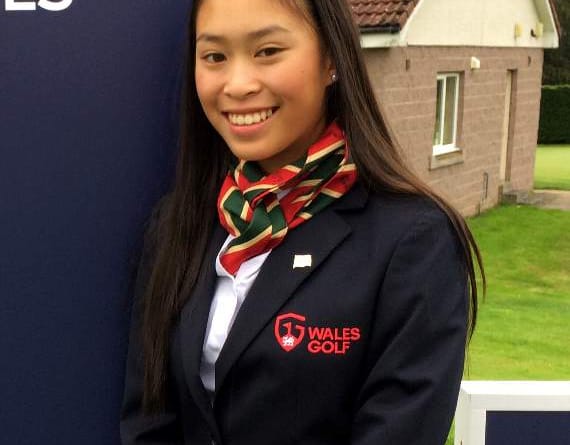 Kasumi Tran who played in her first Girls Home Internationals for Wales.

There has been plenty of junior golfing activity around the regions in the last few weeks with plenty of success for the up and coming young golfers from Tenby.

Kasumi Tran enjoyed a great week in Scotland playing in her first Girls Home Internationals for Wales. Kasumi also finished second in the Scottish Girls Under 14 Championship with scores of 75 and 73.

Kasumi is now competing in the Nick Faldo Junior series at Ashburnham.

Many congratulations to Ollie Morris who won the Boys Under 13 Championship at Llandrindod Wells GC, and now qualifies for the National Finals at Celtic Manor.

Nel Allen and Lucy Anthony played for the Carmarthenshire and Pembrokeshire U16 team in the Wales U16 Inter Counties Championship at Bryn Meadows GC, helping the team to second place, narrowing losing to host county Monmouthshire. Nel won the individual stableford competition with 39 points, with Lucy scoring a very commendable 35 points.

It is great to see so much success from the talented youngsters from Tenby, and all the members wish them all the very best for the rest of the season.