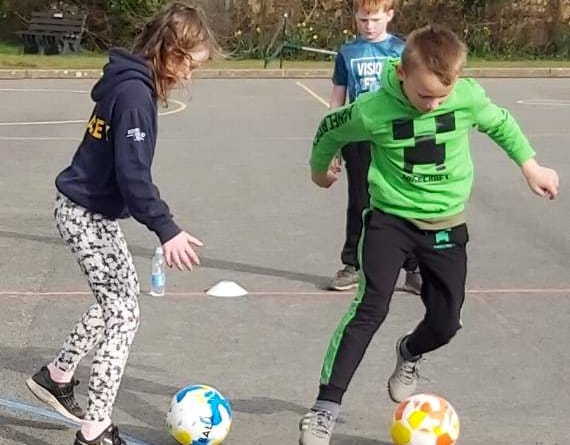 Pupils at Stepaside CP School, Kilgetty, are growing in confidence and skills thanks to signing up to the Swansea City’s Premier League Stars Programme.

The school signed up to the scheme in September 2019 after receiving a sum of funding which they wanted to use to benefit the whole school. They have not been disappointed.

“Prior to Ceri’s PE sessions pupils were not always keen; they might have forgotten their kits or wanted to nip off to the toilet, but they are now completely focused and love every minute of PE. They really enjoy the classroom based sessions and are always eager to learn from Ceri,” shared class teacher Kate Chandler Hall.

Premier League Star’s aim is to help children develop skills, both practical and through studies, whilst gaining confidence, improving fitness, learning values, encouraging teamwork supporting and respecting each other.

At the start of the programme pupils filled in a performance wheel noting how much they liked PE and what they felt their confidence and skills levels were. At the end of the programme they will review this. Both Ceri and the school feel there has been a marked positive improvement.

Fairness is also key to Premier League Stars, in line with this Stepaside School have also joined forces with the Fair Trade In Football campaign and have been using Fairtrade footballs in their sessions.

“When I heard Stepaside were holding extra football sessions, including sessions for girls, I was really encouraged. Thanks to Wales For Africa Grant Scheme funding I was able to donate a bag of Fairtrade footballs to the school for use in these sessions. It’s great to see children growing in confidence and skills, learning about sportsmanship, respect and fairness. By supporting Fairtrade in football the school are also helping to ensure football stitchers are guaranteed a fair deal for their hard work.”

Sharron recently visited the school to find out how the sessions were going and she was amazed by the enthusiasm:

“Pupils in Mrs. Chandler Hall’s class said they were really excited to be part of the Premier League Stars Programme and they loved every part of it - even the classroom based work! What’s particularly encouraging is that this programme is aimed at all pupils, despite their ability or skill levels and that local children, including the girls, have been playing Fairtrade football. This is a great scheme for schools, led by a fantastic Swansea City Football Club worker - highly recommended!”