‘We Will Remember Them’ events for Tenby 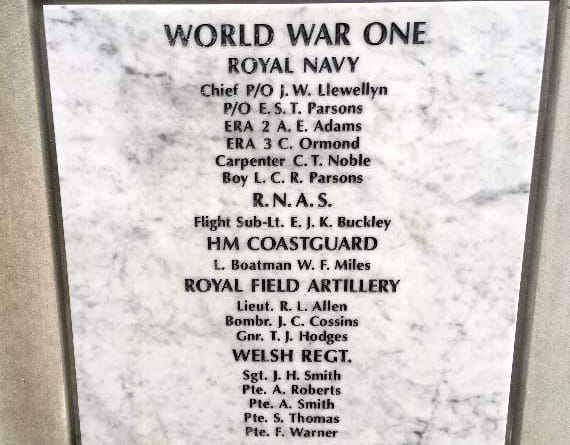 A project to add a list of names that were on the Role of Honour in St. Mary’s Church to the War Memorial, has now been completed.

Tenby will commemorate the 100th anniversary of the end of the First World War with a special concert on Saturday and service on Remembrance Sunday.

On-Call Firefighters being recruited in Carmarthenshire

The ‘We Will Remember Them - Battle’s End Concert’ will take place at the De Valence Pavilion with Tenby and Whitland Male Choirs, along with Goodwick Brass Band performing.

The concert, which will be attended by a number of civic dignitaries from around the County along with representatives of the Tenby branch of the British Legion, will feature a programme of well-known choral and brass band favourites, rousing First World War marching songs and poetry.

All proceeds will be donated to the Royal British Legion Poppy Appeal. Doors open at 6.30 pm, and the concert begins at 7.30 pm.

The Remembrance Sunday parade will begin at 10.45 am from the Hazelwell Club, with a service at the cenotaph at 11 am.

To mark the occasion, a project to add a list of names that were on the Role of Honour in St. Mary’s Church to the War Memorial, has been completed, and the service at cenotaph will start with Revd Canon Andrew Grace saying a prayer to bless the new wall.St. Florence Church and St. Mary’s Church, Tenby are playing their part in Battle’s Over, an international commemoration marking 100 years since the guns fell silent at the end of World War I.Organised by Pageantmaster Bruno Peek LVO OBE OPR, Battle’s Over takes place this Sunday, November 11, with events throughout the United Kingdom, Channel Islands, the Isle of Man, and at scores of locations overseas, including New Zealand, Ireland, Australia, Bermuda, France, Belgium, Canada, the United States and Germany, to name but a few.It begins at 6 am with lone pipers playing Battle’s O’er, a traditional Scottish air played after a battle, outside cathedrals in the country, following which a specially written tribute will be read out. At the same time, over 1,000 pipers will be playing the tune in individual locations within their local communities. At 6.55 pm buglers will sound the Last Post at more than 1,000 locations, where at 7pm beacons will be lit in a tribute called Beacons of Light, signifying the light of peace that emerged from the darkness of four years of war.Then at 7.05 pm over 1,000 church and cathedrals will ring their bells as part of Ringing Out for Peace organised in association with the Central Council of Church Bell Ringers, which represents 65 societies of ringers from the British Isles and overseas. Also at 7.05, more than 140 town criers will perform a specially written Cry for Peace Around the World, the first of them in New Zealand and then across the globe through the various time zones.St. Florence Church and St. Mary’s Church, Tenby are taking part in a Cry for Peace Around the World.In addition St. Florence Church will be ringing the bells, half muffled, before the Act of Remembrance at 10.45 am. The muffles for the bells have been kindly donated by Roger and Margaret Jones, of St. Florence, in memory of Margaret’s parents Vena andWalder Rees. St. Florence Church and St Mary’s Church, Tenby are proud to be playing a part in this historic international event to commemorate the centenary of the end of the Great War, and to recognise the contribution and sacrifice made by the men and women from our own communities.Battle’s Over – A Nation’s Tribute has been devised and planned by Pageantmaster Bruno Peek. He has organised major royal celebrations and international events for more than 36 years and has been working on Battle’s Over for more than four years.“It’s wonderful to see the event being embraced by so many organisations and communities in this country and around the world. The centenary of the end of the Great War is an opportunity to acknowledge the enormous sacrifice made the millions of men and women who died or were wounded, as well as those who worked tirelessly at home in our fields and factories. It has been a privilege to work on this project with the support of so many amazing organisations said Peek.”Battle’s Over – A Nation's Tribute also features special tributes to two groups of unsung heroes – The Chinese Labour Corps and the WW1 Tunnellers.About 95,000 volunteers made up the Chinese Labour Corps, who dug trenches, repaired tanks, laid roads and tracks, transported supplies and assembled shells to free up British soldiers for the front line. Their work was a vital part of the war effort but is rarely acknowledged in the history of the 1914-18 conflict. The official guide to Battle’s Over dedicates a page to the work of the Chinese labourers, most of whom were illiterate peasants.Tai Wee Kuang, a Director of Hong Kong-based L Holding Limited, said: “It is hugely gratifying to see the work of the Chinese labourers recognised in this way. They made a massive contribution to the British war effort and I’m sorry to say that this has not always been recognised or appreciated, so am delighted to support this unique commemoration and have the unique opportunity to pay tribute to my fellow countrymen”The work of the WW1 Tunnellers has been acknowledged in a Lamplight of Peace, commissioned by Bruno Peek and lit at a special service at the Grave of the Unknown Warrior, Westminster Abbey, London, on August 4, 2018. It sheds light on a special breed of men who fought on the Western Front, digging tunnels and laying explosives beneath the German trenches.The Lamp is currently being kept alight by the events four official charities – Royal Naval Association, ABF The Soldiers Charity, Royal Air Force Benevolent Fund and the Merchant Navy Association, before being returned to the Grave of the Unknown Warrior, Westminster Abbey for 6 am on Sunday where a lone piper from the Air Training Corps will play Battle’s O’er.The British Army had about 25,000 trained tunnellers, mostly volunteer coal miners, but they operated in such secrecy that little was known of their exploits for years after the war.The Lamplight of Peace includes a miners’ lamp from the period, a replica Victoria Cross, British and German barbed wire, coal from a Yorkshire coal field, trench post fragments and soil sample from the trenches, and ballast from the railway line where the WWI Armistice was signed.More information on Battle’s Over can be found at www.brunopeek.co.uk/battles-over.