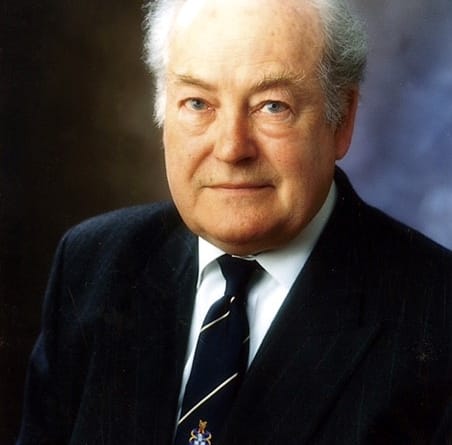 SIR RAY TINDLE was a man who had a life-long commitment to, and passion for, the newspaper industry. He was a newspaper man through-and-through.

Born in 1926, he was the son of John Robert and Maud Tindle. He was evacuated from London during the war and educated at the Torquay Boys’ Grammar School.

After leaving school he went on to enlist in the 1st Battalion Devonshire Regiment, an infantry regiment in the British Army.

He was extremely proud of his association with the now-disbanded regiment and greatly mourned its passing, going so far as to name his previous home in Farnham ‘Devonshire House’ in its honour.

Sir Ray made the Surrey town his home in the 1960s and made such an impact in the following 50 years that he was known by locals as ‘Mr Farnham’. If a charity or organisation needed help, Sir Ray was there.

When a local school needed a computer room, Sir Ray rallied local businesses - and the school got its hi-tech suite.

Alongside him through those years was Lady Tindle. They were school sweethearts, meeting when they were aged seven, and were married at Streatham in 1949.

Lady Tindle had Sir Ray’s same philanthropic attitude to life. She opened a charity shop  in 1987 after her retirement from teaching adults with learning difficulties, with the simple idea of supporting a different charity every time it raised £1,000 in second-hand sales.

It closed last year after 34 years as Lady Tindle said that, at the age of 94, she felt it was time to retire.

She was made an MBE in 2008 for her voluntary services to Farnham. Sir Ray called his wife ‘his rock’ for her unstinting support during their long marriage.

Sir Ray stepped down as chairman of Tindle Newspapers when he was 90, remaining as president, with son Owen taking over.

Sir Ray began his career in publishing by running a newspaper on the troop ship taking him to the Far East.

After returning to this country Sir Ray acquired his first newspaper title, the Tooting & Balham Gazette, with his £300 demob payment.

It was to be the first of many and in the coming years, through a series of launches and acquisitions, the group, under the collective banner of Tindle Newspapers Ltd, now owns local papers and radio stations covering large parts of Wales, Surrey, Hampshire, Essex, Somerset, Devon and Cornwall, Ireland, the Channel Isles and the Isle of Man.

Many of these papers are very long established, including the Monmouthshire Beacon founded in 1837.

Some of his newspapers had actually announced their own demise before being resurrected by Sir Ray.

Sir Ray was a man of immense self-belief and iron determination as characterised by his coat of arms, carried by all his newspapers, with the motto Noli Cedere, which translates as Never Surrender.

It was an attitude which successfully carried his empire though six recessions and led Sir Ray to go from being a ‘general dogsbody’ on the Croydon Times in the post-war years to building up a company previously in the Sunday Times Rich List.

Sir Ray attributed a great deal of the company’s success to the fact it had always remained debt free.

It was his proud boast that every title he had purchased or created had been entirely self-financed. This meant that when economic times turned harsh, the company did not have to concern itself with paying dividends to shareholders or be at the mercy of the banks.

The newspaper magnate has held a number of high positions within the industry over the years.

He retired as chairman of the Surrey Advertiser in 1977 after 35 years and also as a director for 18 years on the main board of The Guardian & Manchester Evening News. He was chairman for ten years of the Belfast News Letter, the UK’s oldest provincial daily. He was a founder shareholder and, for many years, an alternate director, of Capital Radio.

His service in the industry included the chairmanship or vice-chairmanship of most of the main industry committees in the 1960s and 70s. He was the founder chairman of the Weekly Newspaper Bureau.

The publisher became Master of the Worshipful Company of Stationers and Newspaper Makers in 1985 after some 20 years of service on several committees and of the Court.

He was for seven years or more a trustee of the Educational Charity of the company, which makes many major awards and grants where need is shown and has provided equipment and bursaries to schools.

He was the 1990-91 chairman of the Appeal for the Newspaper Press Fund – the industry’s main charity for journalists and was for some years a vice-president of the fund.

He had, over the years, served on an educational committee, a school governing board, a parochial church council and several Rotary charity committees and in 1977 he formed the Farnham Visitors’ Council.

He was the project planning committee chairman for five years before, during and after the initial construction of the University of Surrey.

It was always the Tindle philosophy that his titles should be ‘ultra-local’ and he would often impress on his staff that what he wanted to see in his papers were local names, places and faces.

He firmly believed local newspapers could provide the detailed community content that larger papers and online media could not.

Apart from being a shrewd businessman, Sir Ray also had a more philanthropic side. His activities included the creation of ten Business Enterprise Centres at the height of unemployment in the 1980s, mostly in parts of the country where he had his newspapers to help the local community.

These centres operated 100 units providing rent-free premises for out-of-work people trying to start up their own business.

The scheme was highly successful, helping hundreds of unemployed people get off the ground. All the costs were met by Sir Ray himself.

The first Tindle Enterprise Centre was started at Whitehill in 1984 and was officially opened by the-then prime minister Margaret Thatcher the following year. He also founded one of these centres in West Street, Farnham.

During the foot-and-mouth outbreak Sir Ray also afforded financial assistance to farmers and small rural businesses in the circulation areas of his newspapers who had been hard hit by the agricultural crises which threatened their very livelihoods.

And over the years he also donated sizeable sums to various worthy causes and projects, particularly in and around his home town of Farnham.

One example of this was when he stepped in as the initial purchaser of Bishops Meadow to protect this valuable green space from the threat of development.

Sir Ray was also a long-time supporter of the Festival of Transport each year which raises funds for Frimley Park Hospital and Phyllis Tuckwell Hospice.

Despite the recent air of doom and gloom surrounding the newspaper industry in this country, Sir Ray always remained optimistic and defiant about the future.

Although his overwhelming passion was for newspapers, Sir Ray was also a great aficionado of old cars.

He had a number of such vehicles in his collection and enjoyed a long-running association with the London to Brighton Veteran Car Run.

He marked his involvement in the 50th run in 2013 as always, driving his faithful single-cylinder Speedwell Dogcart, a 1904 car he bought more than half a century ago to fulfil a childhood dream.

It was also the 20th successive Run supported by the Tindle Newspaper Group.

It was Sir Ray’s long-standing passion for the event that persuaded him to provide special support in the early 90s.

He later said: “The organisers wrote to all the participants just a few weeks before the Run reporting there was no sponsor.

“Some of us were concerned that without one the event might not take place. Like a good Devonshire Regiment soldier, I offered to help.”

Sir Ray was never a man to sit back and take things easy. Despite a brief flirtation with semi-retirement it was almost immediately apparent the two did not get on and he was soon back in the thick of the fray. The business ran in his blood.

After his 90th birthday, Sir Ray became president of the company and his son Owen – who runs the Oxon Hoath Retreat and Conference Centre in Kent – took over as chairman.

He died as he would have wished – still committed to the media empire he had so painstakingly created over the course of a long and distinguished career.

In 1973 Sir Ray was appointed OBE for services to the newspaper industry and in 1987 he was appointed CBE. In 1989 he became a Deputy Lieutenant for the County of Surrey. He was knighted in 1994.

He was made the Newspaper Personality of the Year at the 2005 Newspaper Awards and in the same year he was made an honorary vice-president of the Veteran Car Club of Great Britain.

He is survived by his wife, Lady Tindle, his son Owen and granddaughter Maisy.