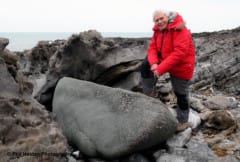 A giant bluestone erratic just discovered near Mumbles, on the south Gower coast, has been hailed as one of the most important glacial discoveries of the last century since it proves beyond doubt that the Irish Sea Glacier was capable of carrying large monoliths of dolerite rock from Pembrokeshire up the Bristol Channel towards Stonehenge.

The huge boulder, measuring 2.2m x 1.3m x 1m and weighing at least 7 tonnes, was found on the rocky foreshore around the mid-tide mark, at a location yet to be revealed, by Mumbles photographer Phil Holden. It’s difficult to know why it had been missed by all previous geologists who have investigated this coast, but from a distance its colour is very similar to that of the native limestone rock, and it might also have been previously covered by sand and beach cobbles.

Phil says: "I must have walked over this boulder a dozen times; lodged in a crevasse, it wasn’t until a falling tide revealed its true colours that I realised this was not just another large erratic for me to photograph for my photo-library but something more significant! "

Phil then contacted retired glacial geomorphologist Dr. Brian John, who has been collecting evidence relating to the transport of the Stonehenge bluestones for many years. Phil thought that the rock might be dolerite, so he also made contact with igneous geologist Dr. Katie Preece at Swansea University with a request for help with identification. She reported that the rock is indeed dolerite (micro-gabbro). There are no rocks of that type anywhere near Gower, and the source area could be North Pembrokeshire.

Reminder of a bygone era at Pembroke Dock

Music festival gets underway in Pembrokeshire

Brian John has now had a chance to examine the boulder on the beach. He says it is a typical large elongated but irregularly shaped glacial erratic, with heavily abraded flanks and facets indicating that slices have been sheared off its flanks during glacial transport. It looks remarkably fresh, indicating a very long history of abrasion by beach materials moved about by the waves. It may originally have been much larger, since there are a number of smaller dolerite boulders on the beach in the vicinity which might have been broken off during storm events. Its colour and texture are very similar to those of samples of unspotted dolerite from some western Preseli tors.

He says: "This discovery is of huge importance to Ice Age research in South Wales and also to the debate about the origins and transport of the Stonehenge bluestones. Archaeologists â and some geologists â have previously assumed that it would have been "impossible" for glacier ice to transport large boulders, pillars and slabs of dolerite from North Pembrokeshire, or anywhere else, up the Bristol Channel towards Somerset and Stonehenge. Many smaller dolerite erratics are known from Gower and other parts of South Wales, but there have been no discoveries to compare with the "giant erratics" that are known from the coasts of Devon and Cornwall. Phil’s very exciting discovery demonstrates that the glacier did indeed transport large blocks of rock south-eastwards from their source areas. There must be other erratics of this size awaiting discovery along the South Wales coast, but unfortunately most of them are likely to be located under the murky waters of the Bristol Channel."

Dr. John adds that this discovery should encourage archaeologists to abandon their long-held belief that the bluestones at Stonehenge were quarried in North Pembrokeshire and transported by Neolithic tribesmen by land or sea on a number of epic expeditions. "Theirs is a nice story," he says. "But the evidence of quarrying is highly suspect, and there is no solid evidence in support of the human transport hypothesis either. Most of the Stonehenge bluestones look like ancient glacial erratic boulders, and that is undoubtedly what they are."