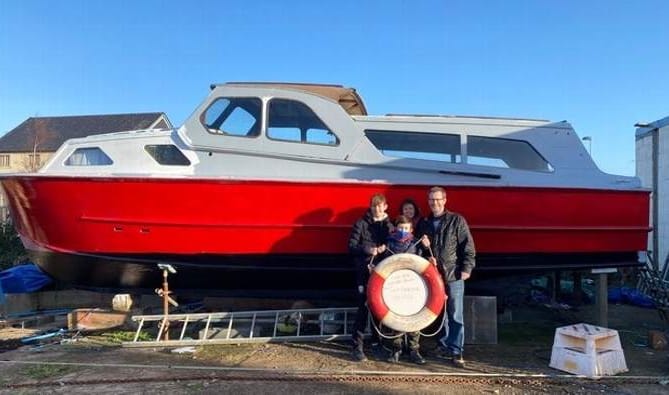 The West Wales Maritime Heritage Society based at the Boatyard in Front Street, Pembroke Dock welcomed their first group to take on the new ‘Code Red’ Escape Boat challenge on the weekend.

Based on the popular ‘Escape Room’ games, ‘gamers’ are given one hour aboard a real boat to thwart a Soviet Spy and prevent him from passing on vital secrets.

The Carter Family had a great time solving various tasks and revealing the position where the spy ‘John Smith’ was to Rendezvous with a Soviet Submarine.

The West Wales Maritime Heritage Society announced last year that they were developing the UK’s first ‘Escape Boat’, and the game will be open to the public in due course.

The Society successfully applied for a grant from the National Lottery ‘Steps to Sustainability’ fund, which enabled them to track down the perfect boat for this project, and to start developing the attraction.

They are very grateful for the funding, and as the name suggests, the grant is aimed at helping small charities to become self sustaining by developing a project to develop an income in the difficult times that we are in at present.

The initial idea was to develop a conventional Escape Room, but it soon Morphed into the Escape Boat idea. After several false leads they found the boat in Norwich.

It now has pride of place on their large slipway, and is being overhauled and set up ready for the gamers to tackle.

The Society have developed a fascinating working Boatyard and Museum, and are proud that being in a town with some deprivation, admission to their yard is free.

By charging for the Escape Boat experience, they hope to raise money to help keep the Society afloat and pay expenses.

Also, they hope that this attraction when launched to the public, will bring in groups of people who may otherwise not visit.