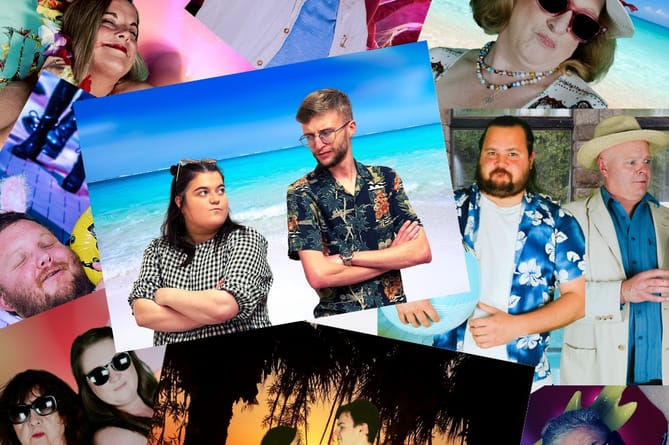 Bringing Shakespeare bang up to date: the cast of Vision Theatre Company’s Much Ado About Nothing.

Vision Theatre Company is set to tackle Shakespeare later this month - but Shakespeare as you’ve never seen it before.

This innovative group has transplanted the Bard’s Much Ado About Nothing into a completely contemporary setting - a budget hotel akin to the one in the TV series Benidorm.

With more than a few nods to the popular ITV show, Vision will perform Much Ado About Nothing in its original language, but the modern set - complete with a swimming pool - will prove that Shakespeare is timeless.

It’s hoped that by giving the play a very current theme it will make it more accessible to audiences who might think Shakespeare isn’t for them - but the stories are universal with Much Ado often billed as the first rom-com.

As always with Shakespeare much of the comedy comes from confusion and in the up-to-date setting of a Benidorm hotel there’s plenty of scope for laughs.

Much Ado About Nothing shows the tribulations of two very different romantic couples; the first of which is Hero and Claudio played by Marcela Ayala and Tom Wears. New lovers, they are in the throes and joys of first love and easy victims of the naivety that brings, when the illegitimate Don John, played by Gethin Morris, takes his boredom out on the new couple. The second pair is Benedick and Beatrice (Saul Bayjoo and Bethan Edwards), whose views on love and marriage are certainly a lot more cynical then their fresh-faced counterparts, leading to an hilarious sparring of wits that might result in some unintended romance.

Rounding off the cast are a host of colourful characters such as the enigmatic Don Pedro (Owain Roach), the busy hotel manager Leonato (Nick Wears), the barman and Elvis impersonator Balthasar (Shaun Pollard), dastardly duo Borachio and Conrade (Alex Jukes and Ross Austin), the mischievous maids Margaret and Ursula (Sarah Hancock and Sarah Scanton) and the bumbling and comedic Dogberry and Verges (Fiona Garrity and Becci Rees)

The show is directed by Arron Evans and will be performed at Boulevard Showbar, Charles Street, Milford Haven on June 23-25 at 7.30 pm.

To book tickets and find out more information head to www.visionartswales.com