Platinum Party at the Palace - at Pembroke Castle! 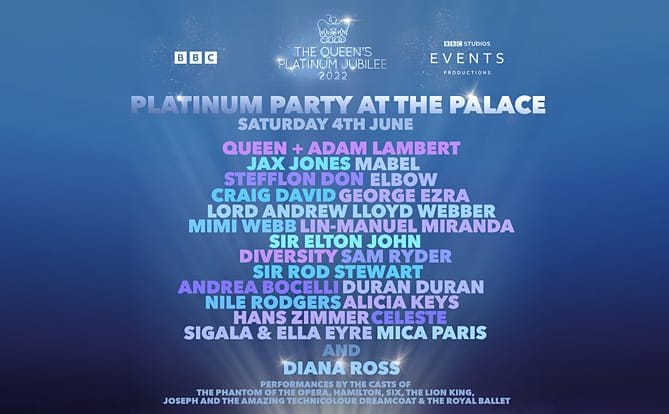 With the line-up now announced, Pembroke Castle can reveal that the large outdoor screen, that will be in place throughout the Jubilee weekend, will be used to broadcast the ‘Platinum Party at the Palace’ to castle visitors on the evening of Saturday, June 4.

Throughout the four days of the Jubilee, the castle will have in place a large outdoor screen so that visitors can picnic on the lawns, visit the castle and not miss any of the national events that will be happening to mark the occasion, such as the Queen’s Birthday Parade, Service of Thanksgiving and the Platinum Party at the Palace concert.

The concert will be opened by Queen + Adam Lambert, 20 years on from their memorable appearance on the rooftop of Buckingham Palace for the Queen’s Golden Jubilee. Other star performers include, Diana Ross, Alicia Keys, Nile Rogers, Andrea Bocelli, Duran Duran, George Ezra and Elbow. There will be a host of famous faces and national treasures involved in the presentation of the concert including Sir David Attenborough, Emma Raducanu and David Beckham. The evening will also feature music from much loved musicals such as Phantom of the Opera, Hamilton, Six and The Lion King.

The exact timing of the concert has yet to be announced but it is expected to run for around two and a half hours and involve three stages. Pembroke Castle will stay open throughout the evening and the castle’s usual entry prices will apply and tickets will only be available on entry. There will be refreshments available from the Castle Kitchen, and Pembrokeshire Cider, and visitors are welcome to bring in their own refreshments, picnic blankets and folding chairs.

Local residents can use their Annual Passes, and details of the Annual Pass can be found on the castle website www.pembrokecastle.co.uk. The Annual Pass deal for those who live in Pembrokeshire is only £9.35 per adult and £6.60 for children and seniors