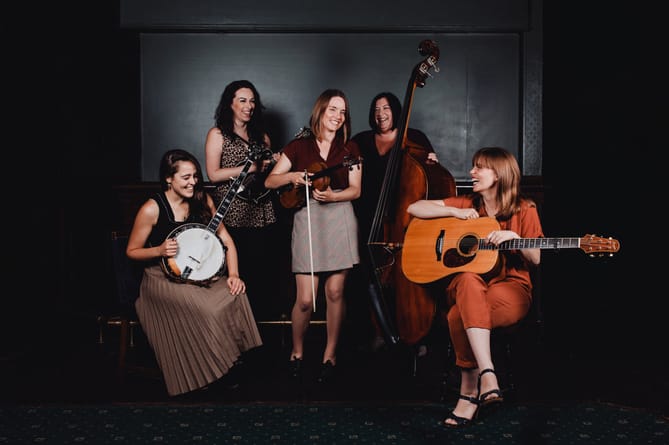 “…probably the best bluegrass I have heard from a non-American band.” – fRoots. (Pic. Elly Lucas )

An evening of wonderful music by Midnight Skyracer at Hook Sports and Social Club has been organized by Pembrokeshire Eclectic Music Society. (A not for profit community organisation).

Midnight Skyracer played at Burnetts Hill Chapel back in 2017 to a sold-out crowd and the tickets are shifting well, so don’t leave it too late! There may be a few still available on the door.

This concert will be on Sunday, June 19 at Hook Sports and Social Club, Newtown Rd, Hook, Haverfordwest SA62 4NB. Doors open 7.30 pm and the show starts at 8 pm.

Midnight Skyracer have come a long way in a very short time.

Paul Young invites you to go ‘Behind the Lens’ next April!

Since forming in 2017, the Anglo-Irish all-female quintet have become festival sensations across the UK, Europe and Australasia, toured regularly at home and released a critically-lauded debut album. They also carry the distinction of being the first British act nominated for an award by the International Bluegrass Music Association.

Their all star lineup boasts Leanne Thorose, with her powerhouse vocals and driving mandolin; the virtuoso banjo playing and delicate vocals of Tabitha Benedict; Eleanor Wilkie and her rock solid bass grooves; the versatile Laura Carrivick, equally adept on both fiddle and dobro; and the lightning guitar playing of Charlotte Carrivick. Not only are they all masters of their respective instruments, but the vocal harmonies shared between the five women are second to none.

Following the release of Fire in February 2018, the band released their follow up album, Shadows On the Moon, in June 2020 on Island Records.